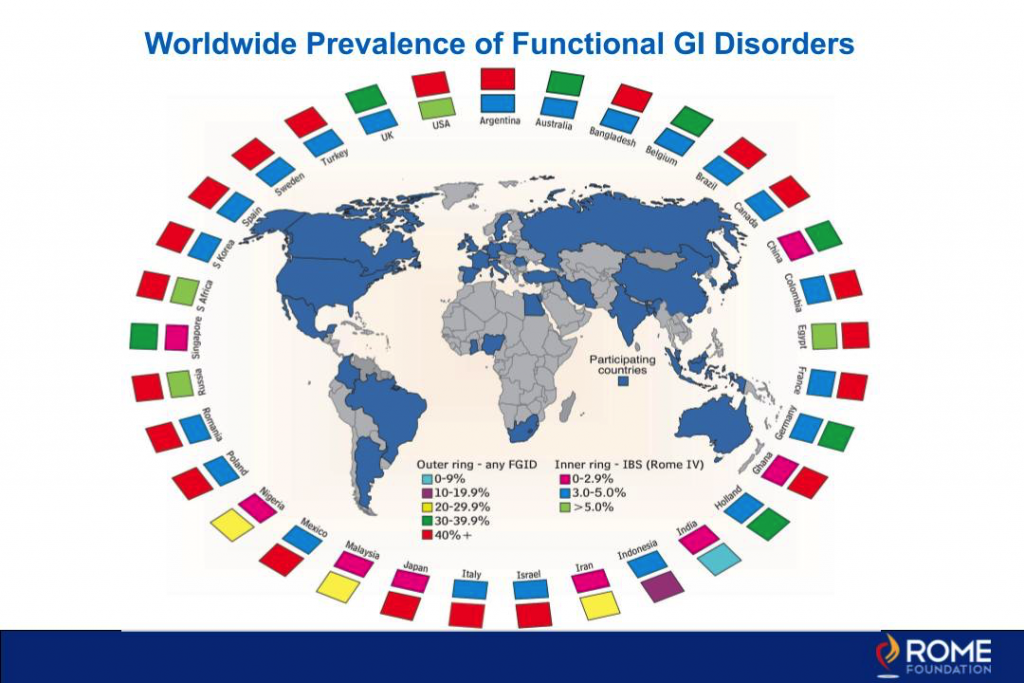 Irritable Bowel Syndrome or IBS, is one of the Disorders of the Gut-Brain Interaction (DGBIs), formerly known as Functional Gastrointestinal Disorders (FGIDs). DGBI's are the most common diagnoses in gastroenterology affecting 11.2% of the population in the United States and worldwide. In the past, doctors called IBS: colitis, mucous colitis, spastic colon, nervous colon, and spastic bowel.

Only in the last several decades have DGBI's been studied scientifically, categorized and treated based on well-designed clinical investigative studies. Symptoms are generated based on a complex interaction among factors such as a disturbance in the gut bacteria, altered immune function of the gut lining, altered gut signalling (visceral hypersensitivity) and central nervous system dysregulation of the gut signalling and gut function.

IBS is characterized by recurrent abdominal pain that is associated with defecation or a change in bowel (stool) habits. Changes in the stool are typically present (ie, constipation, diarrhea, or a mix of constipation and diarrhea), as are symptoms of abdominal bloating/distention. For a clear IBS diagnosis, symptoms should have occurred at least 6 months before diagnosis and symptoms should be present during the last 3 months.

IBS can significantly affect quality of life, however, reassurance can be given that IBS itself does not predispose the patient to life-threatening disease. Patients with IBS tend to be high users of health care services and some patients invest a significant amount of time and money on dietary modification and over-the-counter remedies in an attempt to control or relieve their symptoms.

Genetic and environmental factors are considered as a basis for IBS. A pattern related to IBS has been observed in families. Children of adult irritable bowel syndrome patients appear to make more health care visits than the children of non-IBS parents, not necessarily only related to the gut. There is ongoing research into a genetic explanation for this family pattern. Factors, such as early life experiences, trauma, and social learning, may influence both the brain and the gut, which in turn interact bidirectionally via the nervous system. The effects of altered responses and a person’s mental health and well being may determine the illness experience and ultimately the response to treatment. Furthermore, the response to treatment may in turn affect the severity of IBS. Factors such as these may be essential to the understanding of IBS and the formulation of an individual's effective treatment plan.

After acute infectious gastroenteritis (food poisoning), up to 30% of patients present prolonged gastrointestinal symptoms and a part of those affected patients can have the diagnostic criteria for post-infectious Irritable Bowel Syndrome.

Between bouts of symptoms, people with IBS usually feel well. However, some people may also have non-gastrointestinal symptoms such as fatigue, nausea and backache and feelings of anxiety or depression. IBS can contribute to a reduced quality of life for some people and may affect all aspects of day-to-day life including diet, education, work, travel, personal and social relationships, self-image and psychological well-being

People with IBS are more likely to be:

According to the Rome IV diagnostic criteria definition of IBS, IBS is identified as a FGID Bowel Disorder, or Functional Bowel Disorder (FBD), with these different varieties based on symptoms and/or cause:

Furthermore, each IBS variety can be further classified into mild, moderate or severe based on patient-rated severity of symptoms.

Patients with mild or infrequent symptoms comprise approximately 40% of patients, are seen more by primary care physicians rather than by a gastroenterologist, and does not have a major impact on their daily functioning or are anxious or depressed because of their symptoms.

A smaller proportion of patients, approximately 30%–35%, report moderate symptoms and have intermittent disruptions in activity, for example, missing social functions, work, or school. They may identify a close relationship between symptoms and inciting events such as dietary indiscretion (eating the "wrong" foods), travel, or distressing experiences. They may have more moderate abdominal pain and be more psychologically distressed than patients with mild symptoms.

Approximately 20%–25% of patients have very severe symptoms. They often have a high frequency of associated psychosocial difficulties including anxiety, depression, personality disturbance, and chronically impaired daily functioning, and approximately 10% or more will have work disability.

or these other digestive disorders:

Note: Bleeding, fever, weight loss and severe pain that does not go away are not symptoms of IBS and may suggest other problems. Talk to your doctor right away if you have these symptoms.