The team at Monash University in Australia, led by Professor Peter Gibson, developed the low FODMAP diet. It wasn’t until then did they prove that FODMAPs could trigger symptoms of IBS and research acknowledge that diet could be responsible for IBS symptoms. In turn, limiting dietary FODMAPs became an effective treatment for 3 out of 4 people for treating their symptoms of IBS.

The FODMAP acronym was coined to classify groups of carbohydrates (sugars and fibers) found in foods and beverages, that are similar in length and structure. These, “short-chain” carbohydrates have been shown to be poorly absorbed in individuals living with digestive sensitivities, including Irritable Bowel Syndrome (IBS), and resulting in a common set of gastrointestinal symptoms including abdominal pain, bloating and gas, constipation and/or diarrhea.

What exactly does FODMAP stand for? 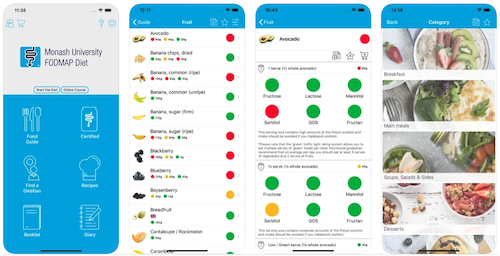 Monash University, Medicine Nursing and Health Sciences has created an up-to-date smartphone app which maintains a current list of FODMAP containing foods. It will provide the most current information of FODMAP.

We maintain a FODMAP Registered Dietitian Registry who can help patients administer the low FODMAP diet.

A medical food is specially formulated to be consumed or administered enterally (orally) under the supervision of a physician. Medical foods are intended for specific dietary management of a disease or condition for which distinctive nutritional requirements, based on recognized scientific principles, are established by medical evaluation. There are several medical foods that are used for treating IBS.